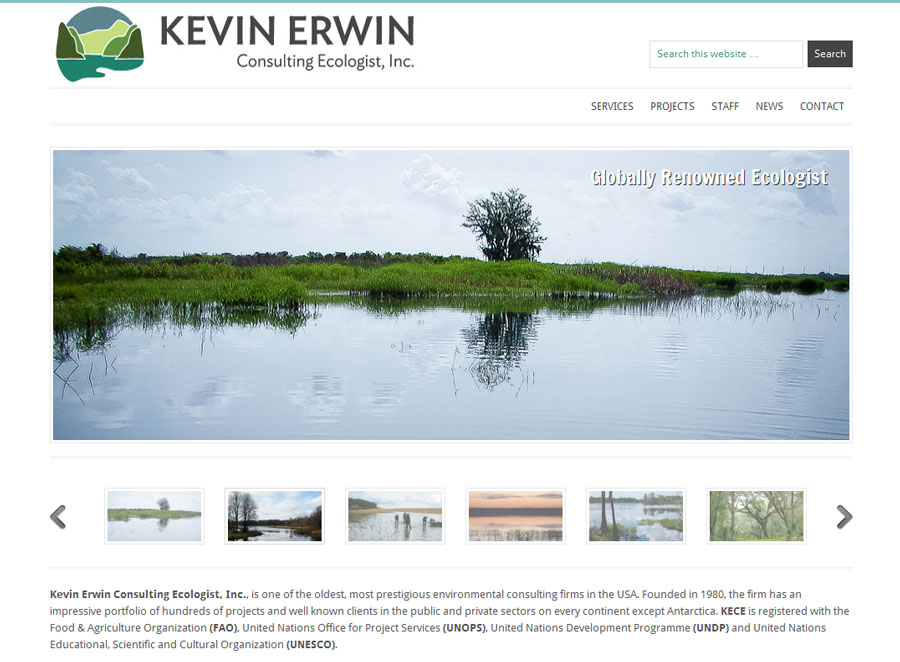 Last summer, Kevin, an internationally known ecologist (and a pioneer in that field), called and told me that he needed a new website built on the same platform that I’d used for New Hope Presbyterian Church. I checked out his “old” site and discovered that it was, in fact, already running WordPress, although it was a bit tired, outdated, and no longer meeting his needs.

It’s amazing to me how much WordPress has evolved in the few years that I’ve been using it. Granted, I’ve evolved, too, and my understanding of WordPress has grown and changed, but I love that today I can do things with this CMS that I would not have dreamed of when I started using it in 2007. I was able to tell Kevin that he already had what he needed, although it was very out of date, and that he would not lose the several years of news/updates that he’d put in. The site renovation was still a big project, but it was a fun one.

I knew going in that I wanted Kevin to have a very clean look for his site. We also needed to make sure that visitors could not only read the news and updates on his site, and see what services his firm offers, but also see the breadth of experience that he brings to his work. We accomplished this with some embedded satellite maps (thank you, Google). We also incorporated on-the-fly translation tools (thanks again, Google) for his international visitors, tucked in some neat before/after images, incorporated custom fonts, updated his branding (thank you, Shane Kingery!), and incorporated pictures (Kevin takes his camera with him all over the world, and has been doing so for years. Yes, I got to look through many many many pictures.).

One of the great things about the site, and about using WordPress in general, is that Kevin and his team can continue to update not only the news pages, but also add new projects, edit information, and really keep it sharp. Go ahead, check out the new Kevin Erwin, Consulting Ecologist website.