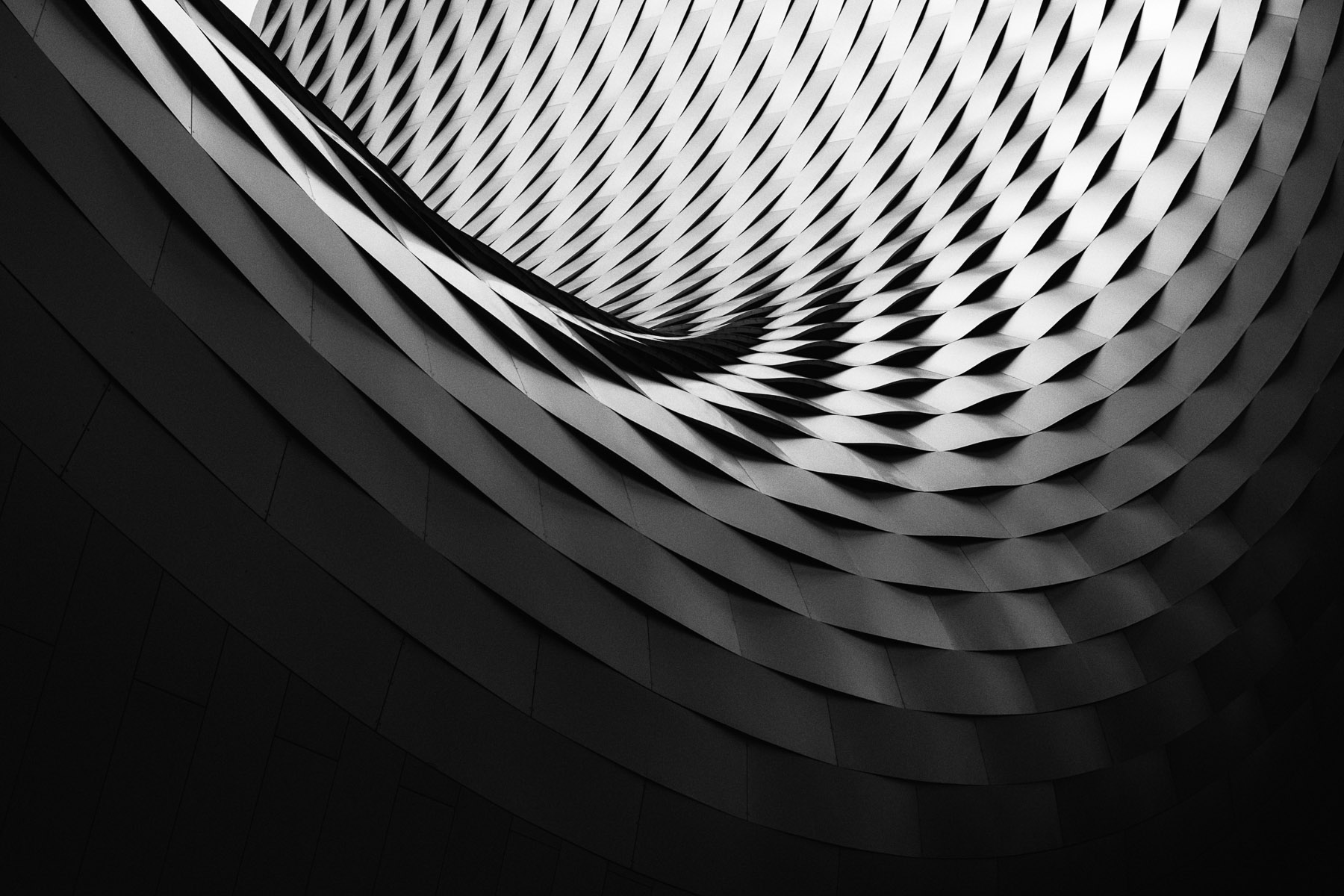 Part of creating a custom WordPress theme for a client involves designing custom styles, not only for the overall site, but also for specific needs or use cases a client might have. One way I can be most helpful to a client is to make sure that what they see as they work in the Visual Editor (also called TinyMCE) is what they want to see on their site. As I create a custom theme for a client, then, it’s really important for me to know what unique approaches my client wants for everything from subtitles to titles to block quotes, so that I can set up the theme appropriately. A client may want all titles to be in all uppercase letters, but it’s important to keep that as a purely visual option. Titles should always be properly capitalized: “My Cool Post About All Things” will adapt easily to future theme and design changes; “MY COOL POST ABOUT ALL THINGS” just won’t.

One tip I give my clients is to treat writing WordPress content similarly to creating a document in Word (or whatever document creation tool you prefer). Although it’s possible to go through your content and make subtitles stand out, for example, by making each one bold and big and a different color, all by hand, you set yourself up for a lot of work, possibly inconsistent styles, and the pain of having to do it all over again by hand if you decide that you want to change how subtitles look–the font, color, size, etc. Word comes with a lot of these styles designed and ready to go. You can adjust them as you like in accordance with your own branding and personal preference. The win comes if you want to modify a style down the road–every instance of that style in use will automatically be updated, too!

WordPress can give us the same kind of flexibility, and consistency. Although it’s possible to change styles by hand, and make subtitles stand out, for example, by making each one bold and big and a different color, all by hand, if (and when) you decide you want to change your theme, you’re left with countless instances of inline, or hard coded, styles, which are no longer consistent with your new look. Mike Hemberger just published a great tutorial for developers who want to remove extra buttons from the Visual Editor.

WordPress does come with a quick basic style selector, which has most of the standard styles a user will need–primarily headings. (Note: please, never never never use Heading 1 in your post content: that is for your post/page title. Developers, it’s easy to remove that from the menu, too: check out Jo Waltham’s quick tutorial on it.)

But what if you’ve created custom styles for your clients, beyond what’s available in that dropdown? Historically, I’ve had to tell them to switch over to the text editor and add those styles by hand, which can be hazardous to everyone’s health. The text editor is a scary place for some users, and trying to tell them how to add “button” as a class to a link may be too much for them. Plus, as the capabilities of the visual editor expand, it’s tedious to switch back and forth.

So I decided to look for a way to bring my own custom styles into the Visual Editor for my clients. And me. My goal was to find something simple and useful, and not over the top. I don’t create a ton of custom styles (usually), but I’d love to make them easy to find. And now I’d like to share that with you.

Note: everything in here requires the use of PHP, so roll up your sleeves and prepare to edit some code. Make sure you back up your files, please don’t use the WordPress theme editor, and practice safe coding.

Add an Admin file to your theme

Everything we add needs to be in your theme, because this is totally theme specific. You can put everything in your functions.php file, but I like to put all of this admin related code into one file, because I’m easily distracted. Mine is creatively called admin.php, added to an /includes/ directory, and I include it from my functions.php with something like this:

If you’re not a Genesis Framework user, just change the genesis_setup hook to something less theme specific, maybe after_setup_theme, or tie it in with however you add other theme PHP files.

admin.php: Add an Editor Stylesheet to Your Theme

This is a one-line WordPress function, and just tells WordPress that your theme includes a style sheet which is specific to the editor:

This will get you one giant step closer to an editing experience which mimics the actual look and feel of your site. Your editor style sheet does not (and should not) include everything that’s in your style.css, just the content specific bits, like font families, how to style block quotes, and lists, and whatever custom styles you may have. If you use Sass, you can separate out the content specific bits into a separate .scss file and automatically compile it. Here’s my editor-style.css, which probably has bits and pieces it doesn’t necessarily need, but gives you an idea.

If you’re adding custom fonts to your site, you’ll want to make sure they’re available in the editor as well. This little snippet loads my Google fonts (Open Sans and Lora) and makes them available to the Visual Editor. If you’re using Typekit, Thomas Griffin has a nice tutorial on adding that to the WordPress Visual Editor.

We’ve made a great start at this point. Here’s what mine looks like so far, compared to what it looked like initially:

I found a handful of tutorials on this, but all a bit old, and including some unnecessary code, so I’m cleaning up a bit and sharing again. When a new user opens the Visual Editor for the first time, there is one line of buttons available. The last button, now called Toolbar Toggle, opens a second line of buttons, most of which aren’t needed by the average user, and some of which are dangerous (the pesky colors button, for example). You can add your new style selector to either row. I kind of like the first row because I know it will always show, but it may be more semantically correct to put it in the second. Here’s the code for both (just pick one):

It’s really important not to stop here, because at this point, you’ve added a drop down with all kinds of generic styles in it, some of which are dangerous, some of which are already covered by your buttons. So now we get to the fun part.

Here’s the fun part. We’re going to replace the excessive style selector and add only our needed and custom styles to it. If they’re in the editor style sheet, we can use them and see the magic happen right there in the visual editor, which is pretty awesome. Here’s the code:

I’ve added three custom styles here, but sky’s the limit for you. I’ll explain my styles, but let me tell you the two absolutely required keys:

Here’s a breakdown of my styles:

At this point, you’re done. If your custom styles are in your editor style sheet, your visual editor will now show them (here are my three): 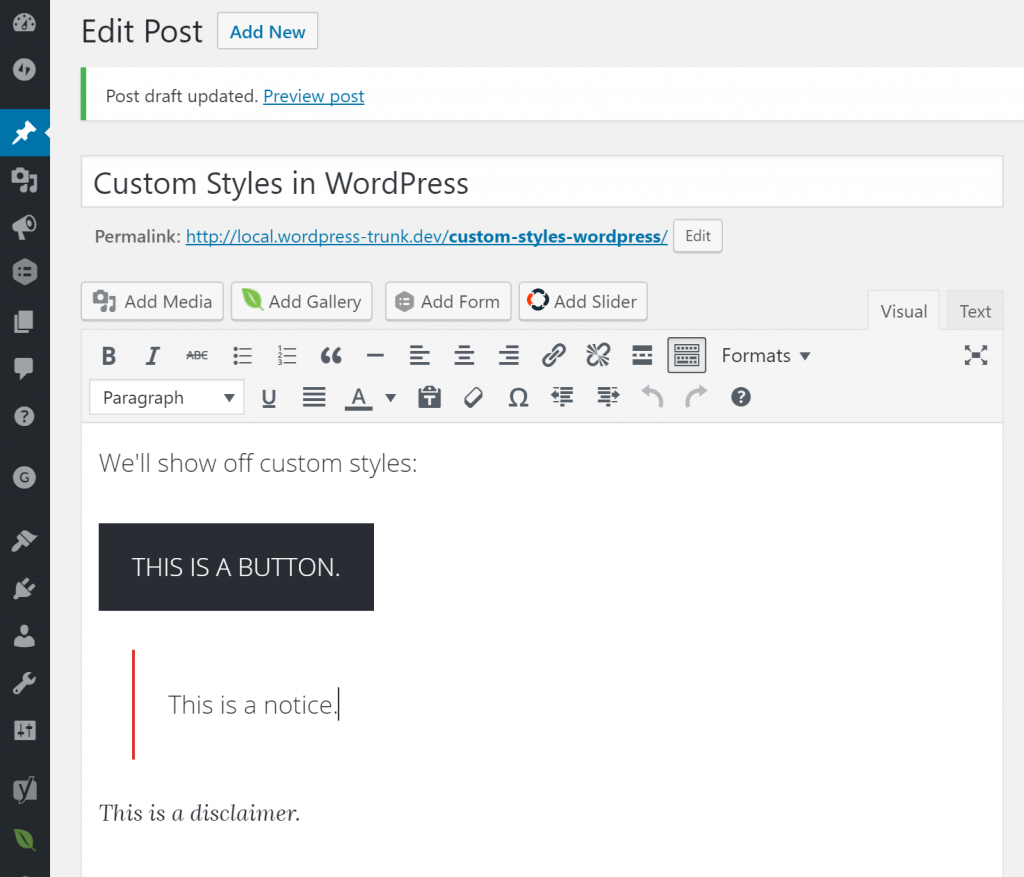 Because all you’re doing is adding custom classes to specific elements, it’s much easier to make sure these styles carry over to your new theme, simply by making sure the new theme includes classes for buttons, notices, and disclaimers.

So that’s it–a fair bit of setup, but once you have the big pieces in place, adding new styles is pretty straightforward, and much easier for clients to manage as they write.